The Alpha Delta Phi Society is a gender-inclusive literary society dedicated to developing character, scholarship, and enduring friendships. Our mission is to bring together a diverse and supportive community, foster intellectual and personal growth, and cultivate passionate individuals of good character and integrity. As a living, breathing organization rooted in a tradition of shared values, we proudly redefine what it means to be a Greek-letter organization.

“[Alpha Delta Phi] must be built on a more comprehensive scale than other societies, in regard to its intellectual proportions; providing for every variety of taste and talent, and embracing every department of literature and science."

The Alpha Delta Phi was founded at Hamilton College, in upstate New York, in 1832. The College, having gone through some rough times over the past several years, was steadily rebuilding itself from a low point of only nine students in 1829. At almost every college in those days there were at least two intensely rivalrous societies. At Hamilton, the Phoenix and Philopeuthian Societies had uneasily coexisted since 1815. Both resorted to incredible strategems and machinations to increase their membership, and thus their prestige. The cut-throat competition reached its peak during the period of Hamilton’s revival when the societies were also struggling to regain their vantage ground.

Samuel Eells was among the large number of students who were disgusted with the partisan practices of the literary societies. After being pressured to join the Philopeuthians, Eells began to contemplate forming a new society of “higher nature, and more comprehensive and better principles; one that should combine all the advantages of a union for intellectual and literary purposes, and at the same time maintain the integrity of youthful character.”

In the winter of 1832, four other Hamilton students joined Eells in founding Alpha Delta Phi. Among those present was John S. Underwood, a delegate to the first two Republican conventions and the Federal district court judge who presided over the treason trial of Jefferson Davis. Alpha Delta Phi grew quickly, having the distinctions of being the first Greek letter society to establish a chapter west of the Allegheny mountains (at Miami University, in Ohio), as well as the first fraternity on eleven other campuses, including Columbia, Yale, Amherst, Brown and Harvard. 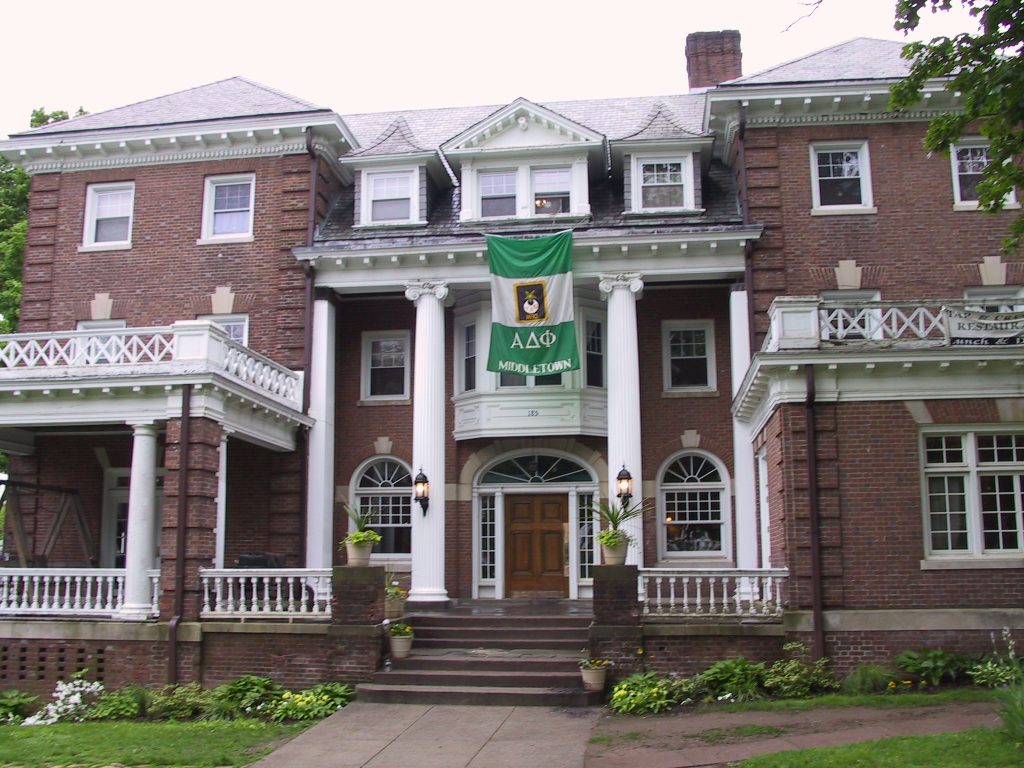 By 1970, Alpha Delta Phi chapters existed across the United States and Canada. But the late 60′s and 70′s were not a good time for fraternities. The notion of a secretive group of men meeting together didn’t fit with the views and attitudes spreading across college campuses. Several Alpha Delta Phi chapters reinvented themselves as co-educated houses. Thus began a twenty year struggle by the co-ed chapters to achieve full recognition for their female members.

After a series of less-than-ideal compromises, it became clear to all involved that the co-ed chapters could not peacefully co-exist with the rest of the Fraternity. In 1990, the co-ed chapters led the drive to form the Alpha Delta Phi Society, an organization separate from, but parallel to, the Fraternity. On Friday August 7th, 1992, a Separation Agreement which formally created the Society was unanimously agreed upon at the annual Fraternity convention.

The four founding chapters of the Society were Brunonian, Columbia, Middletown and Stanford. Since then, the Society has introduced several more chapters.

Read more about our Chapters and Affiliates here.